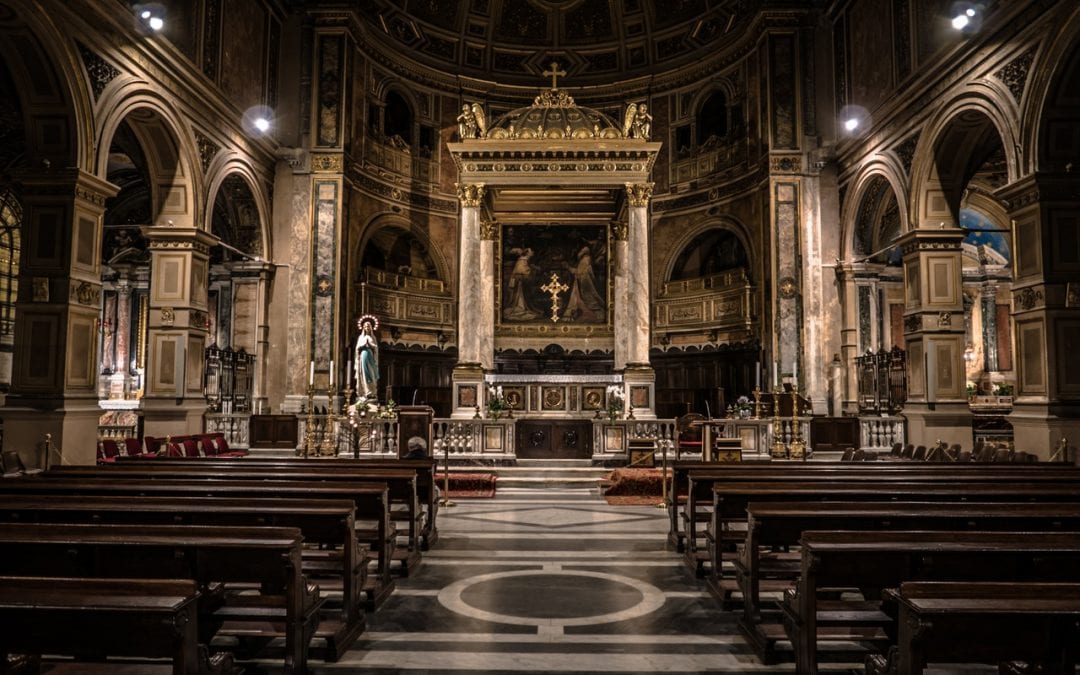 Amid of the current scandal of a systemic conspiracy of moral turpitude throughout the hierarchy and reaching to its highest offices, an old and tangentially related controversy never fully resolved in the life of the Catholic Church is reemerging.  Today we’re hearing calls from among the faithful of all states of life—laity, religious, and clerics of every rank—for mass resignations of clerics, including bishops and even of the pope, on the premise that association with the sins alleged here of their nature delegitimize their claims to exercise a ministry in the Catholic Church, and that, while their sins aren’t beyond the reach of God’s mercy, they just shouldn’t be allowed to continue in ministry, or to be ordained if they’re not ordained already, with sins like these in their past.

Demands for a ministerial purge in the wake of a serious and scandalizing class of sins?  We’ve seen this sort of thing many times in the history of the Catholic Church, but the most famous example of it was called “Donatism.”

The Donatists were a sect of North-African rigorists from around the time of St. Augustine, who, following the Diocletian persecutions, held that clerics who had defected from the faith under threat of grave harm or death should be defrocked, even if they repented of their apostasy and returned to the Church.  They also held that repentant apostates who hadn’t yet been ordained should be barred from receiving Holy Orders.  That standard, though it applies to a different class of sin, is identical in kind to the standard being invoked today.

Like today’s plaintiffs, the Donatists held that such a sin made one an unfit steward of the mysteries of the Faith, that they couldn’t be trusted to lead the Church because of their moral weakness and instability, and that their very attempt to do so would bring scandal to the faithful who’d been harmed by these men and would undermine confidence in the Church’s teaching office.  Once again, that’s what people are saying now.

The sticking point in the fifth century, however, arose from the fact that the Donatists also held that such clerics, because they’d been disallowed the exercise of their ministry, couldn’t validly celebrate the sacraments, because the validity of the sacraments derived, in their view, from the Church’s recognition of their ministry.  The larger consequence of such a view was a huge mess, in which people couldn’t even be sure they’d been validly baptized.  In the end, the Church pronounced against this general thesis.

To be fair to the Donatists, though, the question about the relationship between what’s valid and what’s licit hadn’t yet been worked out in the life of the Church; it was actually being worked out through that very controversy.  In the meantime, the Donatists espoused what, by all accounts, appears to have been the view of St. Ignatius of Antioch, so their position could boast a respectable and traditional pedigree in its own time.

Nonetheless, when the larger Church ruled that certain sacraments could be conferred validly, even if not lawfully, this meant that even if a minister were unfaithful and grievously iniquitous, the people he’d baptized were really baptized and didn’t have to doubt their salvation.  That should be a consolation to us, today, since some of the offenders we’re concerned about had long and active careers.

The practical, disciplinary question, though, remained unresolved.  Should people with certain classes of sins be forever barred from ministry in the Catholic Church?  The controversy with the Donatists was consigned to history because of their extinction in the seventh-century, along with the rest of North-African Christianity, when Islam swept through the region by the edge of the sword.  But the disciplinary question that drove the controversy in the first place didn’t go away.

It’s true, of course, that the Donatists were condemned as heretics, but ending the story there is simply misleading.  They were condemned only indirectly, because of their practical, disciplinary resemblance to the Novatians, not because they shared their actual theological positions.  The fact that the Church eventually pronounced against some of their opinions regarding the validity of sacraments conferred at the hands of formerly apostate ministers needs to be understood in light of the fact the question was an open one until that point, and that even now, there’s more to it than meets the eye or than we can get into here.

As far as the driving disciplinary issue of who should or should not be a minister in the Catholic Church is concerned, though, the Donatists may have had a point, and the Church has even appeared to agree with them at times.  Isn’t this what “zero tolerance” means in today’s context?  Even now, canon law (CIC Can. 1041) specifically censures certain sins, like apostasy, heresy, schism, murder, and procuring an abortion, with perpetual prohibition of the offender from licit ordination, excluding him from priestly ministry unless he’s lawfully dispensed from the impediment.

So, when, today we hear people in all stations of life in the Catholic Church (including, for example, Bishop Lawrence Persico of Erie, Pennsylvania) declaring that certain sins—like sexual assault or covering it up or simply looking the other way—warrant permanent exclusion from public ministry in the Church, we should realize that we’re actually examining a very old disciplinary question, and on that matter, we’re taking the side of the Donatists.

In the midst of great scandal comes a renewed appreciation for the high moral demands of the gospel and the need for a Magisterium in which the faithful could place their confidence without fear of being abandoned by them, betrayed by them, victimized by them, or simply thrown to the wolves or led like sheep to the slaughter.  It was to these sorts of sentiments that the Donatists appealed in their own time.  And today, in the midst of another great scandal, their voices are welling up again from within the heart of the Catholic Church.  They’re the voices of the suffering and the betrayed, and they’re getting louder.