On the Unpronounceability of the Divine Name 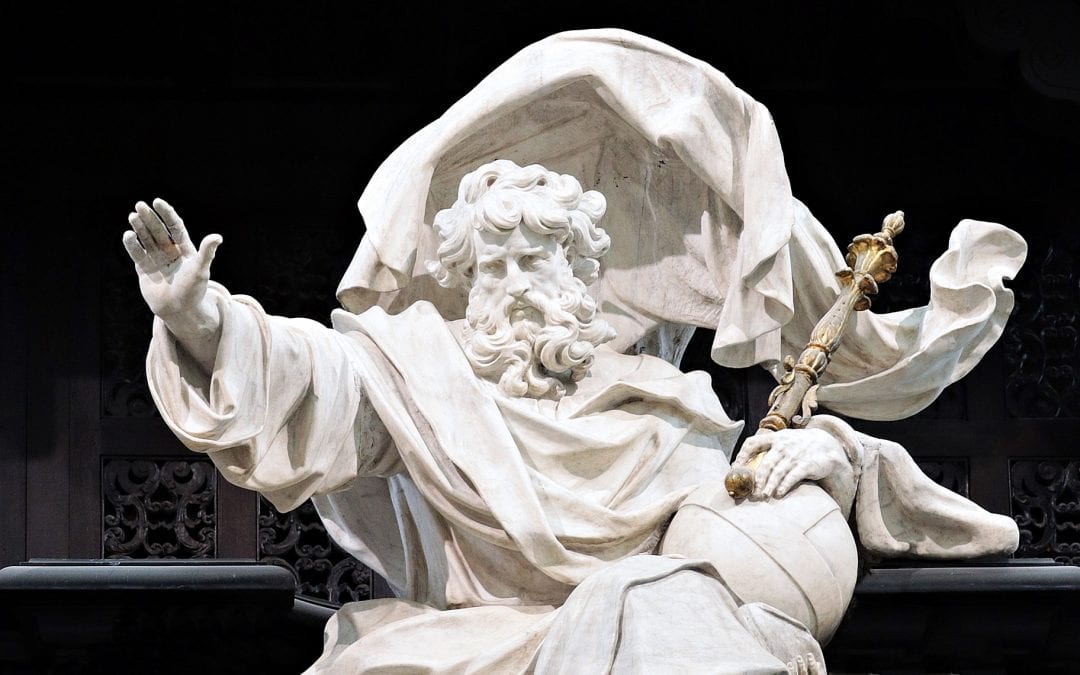 Most people who have studied at least some theology at the college level know that God has something of a proper name, given in the Bible.  We think of the narrative of Moses and the burning bush, where God engages Moses and sends him on a messianic mission to liberate the People Israel for worship.  Moses asks God how he is to answer if the people say to him, “What is his name?” (Exodus 3:13).  Martin Buber reminds us that Moses is not asking what God’s name isas if it were unknown to him.  Rather, he is asking what God’s name means.  In the Bible, names have meaning, so Moses anticipated that the people would want to know what God’s name meant, because, if he is coming to them as a prophet, he ought to know.

God’s answer is a paradox.  His name appears in the form of a verb in the imperfect tens, and it thus means something like, “I am now as I have always been and always will be, not as you would have me be but as I would be, utterly uncontrollable by anyone.”  God’s name means his radical transcendence beyond everything other than himself—that he is the cause of all things that are not God—and that, therefore, he is beyond dependency or manipulation, beyond threats or extortion—and he alone sets the terms of his own agency.

This quality of the biblical God sets him apart, quite radically, from anything we have ever yet encountered in the ancient world.

But parents impose names on their children, and in doing so, exercise authority over them. In the garden, the Man names the animals (Genesis 2:19–20), who, until the Fall, obey him without the need of bit or bridle.  As a sign of the disorder the befalls the relationship between husband and wife on account of sin, Adam then imposes a name upon his wife, as well (Genesis 3:20), and, just as God had said he would, he “dominates her” (cf. Genesis 3:16). When someone calls a person’s name, it has an effect, almost invariably, of halting the person’s movements or causing the person to turn his head.  The invocation of a name seems, at least for a moment, to forcea response—to controlthe other, reign him in, and capture him.

Thus, in the ancient Semitic cultures, the invocation of a name meant the exercise of some measure of influence over the one whose name is called.  It was through the possession of a god’s name that the ancient pagan priests were able to conjure their gods in forms of worship that amounted, essentially, to magical rites.

Yet God’s name means that such a thing can never be done in his case.  He cannot be controlled.  He cannot be constrained because he himself is the precondition for the existence and power of everything other than himself.  God’s name, once again, is a paradox.

Thus, when God reveals his name to Moses and, through Moses, to Israel, he is voluntarily assuming a posture of vulnerability before them, yet, there is no way they can actually control him or do him harm. He does not need them but only wants them.  His vulnerability is based entirely on his own intention to bless and to love a creature whom he made capable of a free response.  Thus, God is saying that he will answer all who call upon his name, not because he must, not because they have exercised any power over him by invoking his name, but because he now pledges to be their God and to cherish them as his own.  His name is, thus, also a promise.  It means, “I am present to you always and everywhere,” an idea represented in the word “Emmanuel,” or, “God-with-us.”

Pronunciation of the divine name

What is interesting about the voluntary self-offering of God in the entrustment of his name to his people is that it necessarily precluded the basic mode of worship that characterized every other cult practiced by anyone they had ever met. God could not be “called down” to the world of man, but instead, God chose of his own accord to “go down” as he willed.  Thus, the second Commandment of the decalogue, which might be translated from the Hebrew as, “You shall not take the name Yahweh your God in falseness” (Exodus 20:7), actually has as its first concern the use of a pagan mode of worship toward God. One is forbidden to “take” or “carry about” (נָשָׂא= nasah) the name Yahweh in the “falsehood” or “deception” of a form of worship by which the name is rendered “empty” of its actual meaning (שָׁוְא= shav)—a form of worship in which the name Yahweh is contradicted.  You shall not attempt to conjure God in a magical rite.

The attempt to conjure God contradicts the meaning of God’s name in two significant ways. First, it presupposes that we can make God come to us and do as we wish—that we can hold something over him that makes him beholden to us.  But his name clearly means that such a thing can never be.  Second, the attempt to conjure God presupposes that God will only come to us because we make him, when in fact, his name means that he comes to us only and always because he already wishes to do so, and makes the promise, “I am present to you always and everywhere.”  The attempt to conjure God constitutes a denial of these two fundamental truths embedded in the very meaning of the divine name, and thus a denial of God himself.

In time, then, the Hebrew people began to grow increasingly reticent about ever pronouncing the name of God at all.  If the invocation of a name implied the exercise of control over the other, and such a thing is impossible with God, his name carried with it a warning against its misuse.  Little by little, its use became increasingly restricted until it was pronounced exclusively in the context of specific ritual events, carefully proscribed, where, even then, only specific persons, like the High Priest, could utter it.

There is a sense, in other words, that the pronunciation of the divine name constituted what logicians would call a “declarative contradiction,” which occurs when a thing is logically possible in itself but cannot be so in its being said. An example of this is seen when one says, “I’m not talking to you,” or “Everything I say is a lie.”  If we assume, as well, that the pronunciation of a name means the exertion of control over the other, saying “Yahweh” is another instance of this.  In that case, saying“Yahweh” would be tantamount to denying Yahweh.

What does your name mean?

Of course, the Jewish people knew that the invocation of the divine name did not necessarily mean that we were “taking it in falsehood,” but given the frailty of fallen man and the difficulty we have in approaching God as we really ought—given our littleness of faith and our hardness of heart—it is highly likely that our prayer before God will not be free, entirely, from duplicity.  To be safe, it was judged best to leave the divine name unspoken.

We should remember that, as evinced in the New Testament and the writings of the Apostolic Fathers, this attitude toward the divine name is part of the Christian tradition that we share with Judaism.  Even today, in the Catholic Church, we are forbidden to use the name Yahweh in a liturgical setting.

Although the use of the divine name is now generally accepted by Christians in scholarship, it remains true that it should always be used with reverence and never bandied about casually or in jest.  I use the divine name in scholarship quite deliberately, precisely because I believe the true profundity of the name is no longer immediately evident in the contemporary English-speaking context through words like God and Lord.  My use of the name is not at all casual, but an attempt to remind us of the answer to Moses’ question: “What does your name mean?”