Humanae Vitae: Being Responsible to God 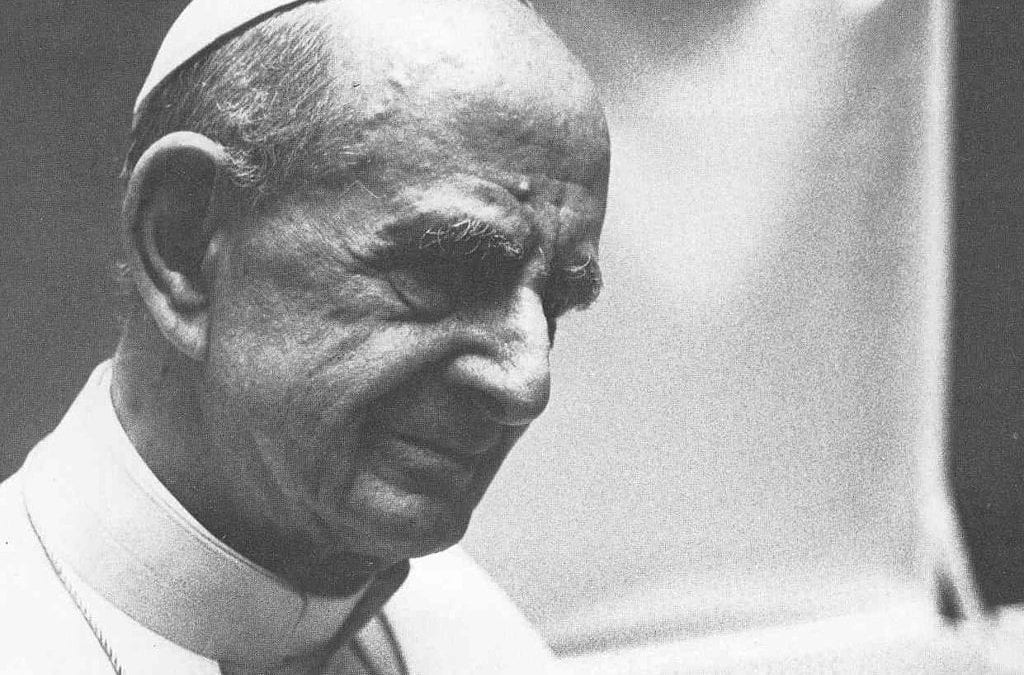 Fifty years since the publication of Humanae vitae, the dream of a well-formed Catholic conscience on the subject of the conjugal life continues to elude us.  In terms of numbers, at least in the West, those who accept Church teaching on these questions are a tiny minority of the Christian population, even among those who self-identify as Catholic and attend Mass according to the canonical precept.

In this first installment in a series I’ll be posting for the fiftieth anniversary of Humanae vitae, which occurs this month, I’d like to draw our attention to one dimension of the encyclical that’s probably least appreciated by its readers.  It’s interesting that when Paul VI published Humanae vitae and addressed the question of responsibility in the exercise of the conjugal act, not only did he reaffirm the Church’s perennial teaching against the use of contraception, but did so precisely as a matter of responsible parenthood.  Husbands and wives together share a responsibility, not only to one another, to their children already born, and to society at large, but first above all, to God. And the choice to engage in the conjugal act while altering it so as to prevent conception tells us a great deal about how we think about that responsibility.

St. John the Divine, in his first Epistle, declares, rather famously, that “God is Love” (1 John 4:8. 4:16).  The root word he uses here for “love” is agape ( ἀγάπη ), a word that indicates the love that is “belonging-to, belonging-with, being-for” the other.  John’s assertion here is a direct reference to the interior relationality of God as denoted in the Hebrew word, Elohim ( אֱלֹהִים ), which is the plural form of the exclusive superlative, connoting the One True God who is, within himself, a plurality. This revelation about God already present in the Old Testament is radicalized in Christianity, as the Triune Godhead: Father, Son, and Spirit.

For John, in fidelity to what has been revealed from ancient times, to be God is to exist in this way—as the life-giving, being-producing, eternal dynamism of interpersonal self-donation.  God, of his nature, is interiorly outwardly-turned.  It’s this view of God that finally makes sense out of the philosophical intuition that the Good is self-diffusive, and it gives rise to the idea of “creation” in the proper theological sense of the term.

But what is the proper theological sense of the term “creation”?  To put it simply, creation means that there is, at the foundation of all things, prior to them and productive of them, a single, absolute, eternal source, which thinks and wills into being that which is other than itself. Creation means a conscious and free choice on the part of the only thing that exists eternally and through itself, to produce other being, and that because this other only exists by virtue of that free and conscious choice, it depends unceasingly for its existence on the One who Is, and who by his free and conscious choice sustains it in being.

To put it in more theological and less metaphysical terms, we can say that creation is God’s outward manifestation of his innate glory, inasmuch creation means that the interpersonal Love that is God’s eternal mode of existence is so fecund in its outwardly-turned posture as to be able to give rise to something wholly and entirely new.  New being is the voluntary fruit of God’s own love, and embedded within new-being is a creature capable of perceiving the fact of its own contingency and turning back to its origin by asking the questions, “Where do I come from, and why do I exist?”

Leaving the difficult issue of angels aside right now, it’s obvious to most readers that human beings ask these questions.  We can say then, that in the metaphysical order, human beings represent the point at which creation—which is a kind of thrusting-outward by God in an act of other-making—begins its return journey.  This outward-thrusting movement that resolves in a return trip is what the Mediaeval theologians meant by the Latin phrase, “exitus–reditus.”

But what does all this have to do with contraception?

In the first Chapter of Genesis, where God’s creative choice is explicitly revealed in the use of the Hebrew term bara’ ( בָּרָא), he makes humanity in his own image and likeness.  The depiction of his creation of humanity in this regard is unique.  We’re the only creature in this narrative to bear his image and likeness, and the very first descriptor of that image and likeness comes in the reference to our being sexually differentiated (Genesis 1:27). While it’s clear that other animals also reproduce sexually and exist as male and female, it’s only in the case of human beings that sexual differentiation is depicted as an important sign reflective of our relationship to God.

The command for human beings to “be fruitful and multiply,” given in Genesis, is thus, at least in part, the command to be responsible to God in the manifestation of his glory.  Human beings are described in this narrative as God’s “mighty act” (Genesis 1:26), when God acts upon his will, “na‘ăśeh” ( נַֽעֲשֶׂ֥ה)—to undertake a monumental work by which he will be remembered for all time.  Human beings are a monument to God’s glory—to his essence.  Made in his image and likeness, we reflect, precisely in and through our sexual differentiation, God’s own self-diffusing love, capable of giving rise in its superabundance to something wholly and entirely new.  It’s precisely this aspect of conjugal love between a man and a woman that the use of contraception rejects.

To enter into the conjugal act, while truncating this very dimension of its structure, is a grave affront to God, for it represents a denial, at least implicitly, of some essential dogmatic content of what God reveals to us about himself and us.  Precisely at that moment in which the human organism exists as communal love and we’re called upon to be a living monument to his creative, self-diffusive goodness, we deny what we ought to affirm.  Either we deny that God is Love—that God is Elohim—or else we deny that we’re made in his image and likeness.

Just as to be God is to be Elohim or, as we know in Christianity, to be the Holy Trinity, so to be humanity as an integral whole, is to be that self-aware, freely-willing male–female dyad.  The interior logic of this mode of existence, where it’s realized in the conjugal act, is to be productive of new life in and through interpersonal communion.  In this way, humanity is like God who, as Elohim, turns outward and gives rise to something wholly and entirely new in the act of creation.  Indeed, as we’ll examine in our next installment, each and every human being is a new creature—something more given within the cosmic frame, not merely a recycling of the old or a reconfiguration of what was already here.  When theologians use the term procreation rather than reproduction in speaking of human generation through the sexual act, these are the ideas at stake.

In any instance, therefore, deliberately to alter the sexual act in such a way as to suppress its innate generativity is to deny a fundamental truth about ourselves revealed by God and given as his own stamp upon creation.  Using contraception is a means of relegating the image and likeness of God’s self-diffusing goodness and love to something non-essential and negotiable about humanity.  From a biblical perspective, it’s not.  It’s part of what it means for us to be human, and it’s as much a part of the meaning of human being as our having bodies, or as our being rational and having free-will.

Paul VI reminds us that manifesting this truth about humanity is part of our responsibility to glorify God in creation by manifesting the truth he reveals to us about himself: that he is Elohim, the God who is Love, and who, in an act of love, chooses to make his goodness known and shared by someone other than himself, who exists to be loved at all only for that reason.

Add your thoughts or ask Dr. Bulzacchelli a question in our member-only forum here.