Epiphanius on the Assumption 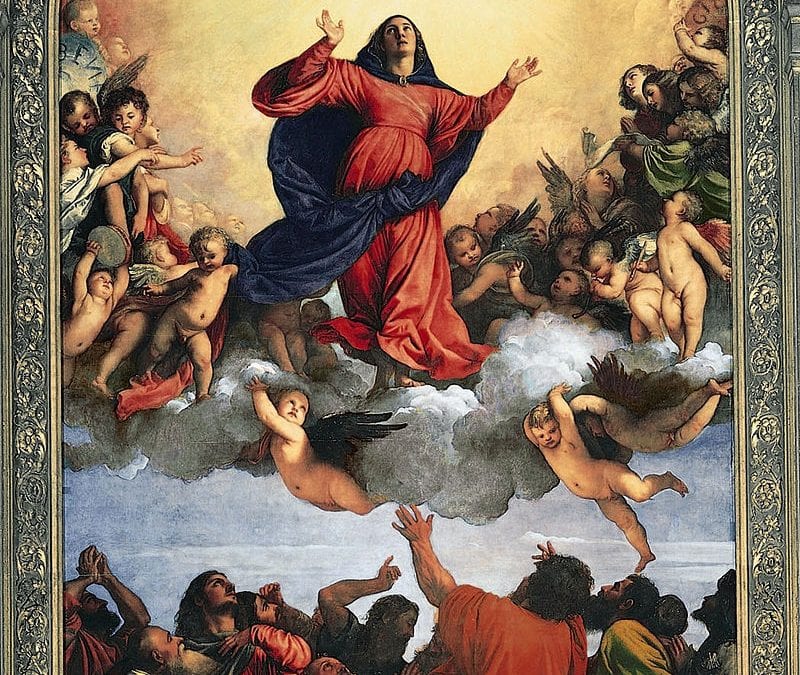 August 15 is the traditional date on which the Roman Catholic Church celebrates the Feast of the Assumption of the Blessed Virgin Mary.  Under various names and on various dates, this feast is celebrated in nearly every church of apostolic origin.

We don’t know precisely when and where this feast first emerged, but we know for sure that it can be found as early as the sixth century.  The explosion of feasts celebrating distinct events in salvific history is largely a product of the fourth through fifth centuries, as Christianity took on a new role as an “official” religion.  Even the advent of festal days for saints (rather than events) originated only in the third century, and was then a local phenomenon, specific to particular churches in association with their own holy men and women, so the appearance of a distinct feast commemorating the Assumption of the Blessed Virgin into heaven as early as the sixth century should be seen as evidence of the ancient pedigree of the belief.

Indeed, the controversy over the word Theotokos (θεοτόκος) or “birth-giver of God,” which led to the Council of Ephesus in 431 seems to be associated with the process of expanding the festal calendar, when the term migrated, at the hands of Syrian hymnodists, into the liturgy of Constantinople in the early fifth century.

Thus, when Epiphanius of Salamis (d. 403) chooses to withhold judgment regarding the events of Mary’s passing, the theological point to be taken here isn’t that he doesn’t believe in the assumption of the Blessed Virgin Mary into heaven but that such belief was so widespread by the end of the fourth century that he’d been placed in a position to address it.

Now, we know that belief in the assumption of the Blessed Virgin is directly linked, in the minds of those Fathers who first advocated for it, with the doctrine of Mary’s perpetual virginity, which itself was extrapolated from the virgin birth and its association with the Incarnation of God in Jesus Christ.

The virgin birth demonstrates that Jesus has no human father, so the virgin birth is a prerequisite for establishing the divinity of Christ, but by itself, it’s not enough.  Jesus isn’t just a miraculously generated being but True God from True God, and thus, Life itself.  This is what makes the perpetual virginity the next important step in defending Christian dogma, because the loss of virginity was seen as a kind of reminder, built into creation, that everything that’s born is subject to the rule of death, and thus, that birth and death are of a piece.  Thus, in saying that Mary never ceases to be a virgin, the early Christians were saying that, in her giving birth to Christ, the whole structure of the cosmos was forever changed—that death no longer ruled over life but had been destroyed by it, and that the One to whom she gives birth is Life itself: True God from True God.

The assumption of the Blessed Virgin Mary into heaven then involves the assertion that the same effect that Christ has over her bodily integrity in this life is extended to her after death, not just in the form of a promise like the one you and I receive but in the form of a concrete sign to be observed by us, here and now.  If Life has destroyed death then Mary is liberated from its dominion, as we will be as well, when all things come to pass.  So, right now, Mary enjoys what you and I await—the resurrection of the body and inviolable life in the bosom of the Father.

It was on this last assertion alone that Epiphanius reserved his theological judgment, but it’s important to see that he doesn’t hold the thesis of the assumption of the Blessed Virgin to be heretical, while he absolutely does hold as heretical the denial of Mary’s perpetual virginity.  Such a denial was the chief heresy of the Antidicomarianites, whom Epiphanius explicitly confronts in the course of his ecclesiastical career.

He also confronts the Kollyridians, however.  They were a women’s mystery cult in which Mary was actually worshipped as a goddess—a view that certainly relies upon the thesis that Mary exists as a heavenly being, and which thus, almost certainly grew out of an older assumption tradition regarding the Virgin Mary, which the Kollyridians must have radically distorted into an ascensiontradition—believing that Mary had ascended into heaven under her own power, as Christ had done.

As a mystery cult, the Kollyridians would have been gnostic, like the Docetists, who saw the Incarnation as an appearance only, and they would have been dualistic. It would be a short step from here to asserting that Mary, who’d gone up to heaven, is also an appearance of the divine, like Christ, as it seems the Kollyridians held.  After all, if Christ’s Incarnation is only an appearance, then Mary doesn’t have to be human to give birth to him, and if Mary were also a divine appearance, she would supply a feminine counterpart to the Incarnation, which would make sense from a dualistic perspective.

That the Kollyridian view was, indeed, a distortion of an earlier assumption tradition is witnessed in a homily given by Theodosius, the Jacobite patriarch of Alexandria who died around 567.  Speaking in the voice of Christ to the Virgin Mary, he explains that had Mary been assumed into heaven without first passing through death—as Enoch and Elijah had been, according to the Scriptures—”wicked men would think concerning you that you are a power which came down from heaven, and that this dispensation took place in appearance alone” (On the Dormition of Mary).  Theodosius makes these remarks in a homily in a liturgical context, celebrating the Assumption and defending it mystagogically as he corrects a heretical distortion already centuries old by this time.

To put into perspective how ancient the pedigree of the doctrine of the Assumption of the Blessed Virgin is within the patristic tradition, consider the fact that it clearly predates the Council of Ephesus (431), almost certainly by more than half a century.  In fact, if we think about how ideas tend to develop and distort, the fact that Epiphanius confronts a heresy arising from a mutation of an assumption tradition suggests that the explicit belief in the assumption of the Blessed Virgin Mary was probably well-established even a hundred years before he addresses it.

Now, in this brief review, we’ve really only considered the question of the ancient origins of this assertion, not its development over time or the way in which later Fathers came to read the New Testament in light of it.  Much less have we considered the important question of what Pope Pius XII saw to be at stake when he determined, in 1950, that the doctrine of the Assumption should be solemnly defined as revealed by God. Those are both important questions, which we’ll leave for another time.