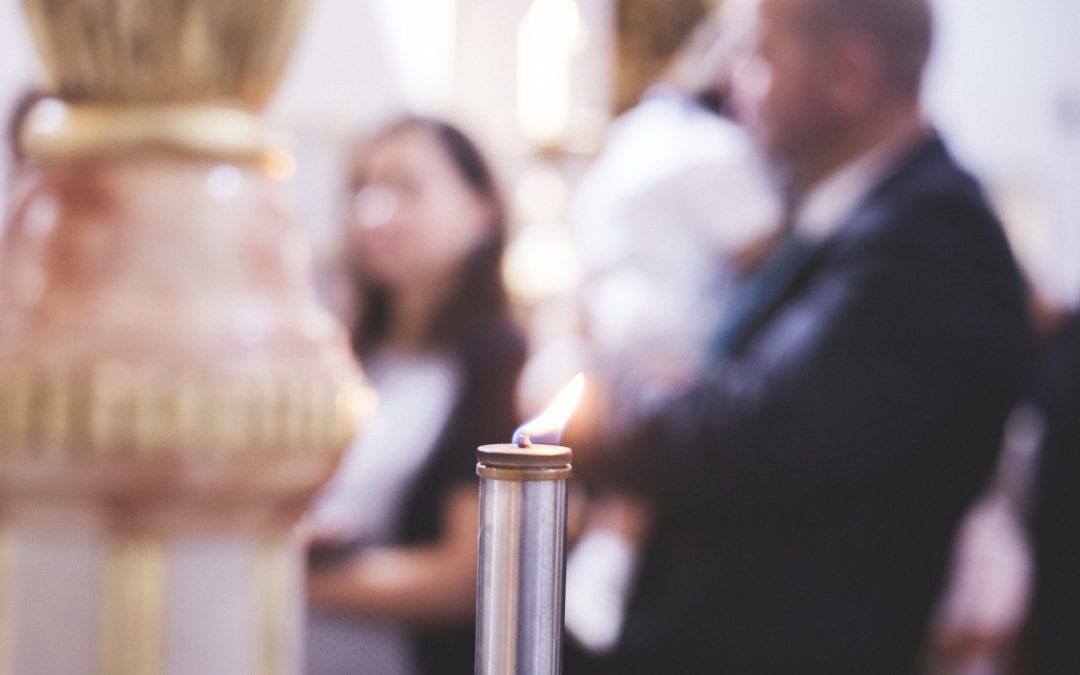 Several years ago, the Congregation for the Doctrine of the Faith published a response to a dubium concerning the sacrament of baptism.  In some communities, it was argued that the traditional form of baptism according to the words, “I baptize you in the Name of the Father, and of the Son, and of the Holy Spirit,” was too “gender exclusive,” and should be rendered “gender neutral” by changing the terms by which we refer to the divine persons.

Some began to baptize with a different formula, saying, “I baptize you in the Name of the Creator, and of the Redeemer, and of the Sanctifier.”  The Congregation for the Doctrine of the Faith had been asked whether baptisms administered according to this form were valid, and if, therefore, they needed to be repeated.  More specifically, when the validity of a sacrament is questioned, the Church sometimes remains cautious about making any final pronouncements about the issue, and allows for the sacrament to be repeated conditionally—that is, on condition that it has not already been administered.  This is important in the case of sacraments that are said to “imprint a character on the soul,” because what these sacraments do for the person who receives them can only be done once.  Baptism is one of these sacraments, and the Church professes to believe in “one baptism for the remission of sins.”

The Congregation for the Doctrine of the Faith determined that the form of baptism “In the Name of the Creator, and of the Redeemer, and of the Sanctifier,” was not a valid form of baptism, and thus, that the sacrament had to be repeated for those who were baptized in that way. What is more, the Congregation determined that the sacrament would have to be repeated, not conditionally, but absolutely, indicating that the Congregation had arrived at a definitive assessment of the doctrinal status of this issue.  “Roma dicta, causa finitum est”—“Rome has spoken, the discussion is over.”

But what is behind this determination?

How can the Congregation for the Doctrine of the Faith be so sure these baptisms are invalid? After all, language is inadequate to express the full truth about the divine mysteries. Are we just talking about different words that really mean the same thing?

More than a matter of words

When the CDF publishes a response to a dubium, however, they rarely supply a theological explanation, and this incident is no exception.  If we do not understand that fact, we might wrongly interpret the Congregation’s response as a bald assertion devoid of any rationale.  But as a matter of policy, and rightly so, the work of formulating a theological explanation for dogmatic affirmations is left to theologians.

That said, this question has actually been around for a long time.  This theologian has been aware of it for about three decades.  The CDF’s judgment on this question comes as no surprise, and the reason for it is readily at hand.

In the Middle Ages, St. Thomas Aquinas had considered whether variations could be tolerated in the words employed to confect a sacrament.  His answer was, basically, up to a point.  Of course, Aquinas had to say this, because we already know that, in the wide array of Rites in the Church, the sacraments are validly confected, even according to somewhat different words and gestures.  But Aquinas insisted that, when what we say can no longer communicate the essential character of the sacrament we are trying to administer, the sacrament itself becomes invalid.  That would be the case, in baptism, were we to attempt to baptize someone “in the Name of the God who is Earth.”  The God at issue in Christian Baptism is not Earth, but “the one who is above all.”  Christianity is not a nature religion.

Likewise, we have to remember that baptism is not just a means of being incorporated into a social group (i.e., the Church as a social organization), but into the inner life of God.  When we baptize “in the Name of the Creator, and of the Redeemer, and of the Sanctifier,” we are not baptizing validly, because we are not baptizing in the Name of God as he really is in his inner life, which he comes to share with us, but instead, into the Name of what God is from my own point of view.

Let us be clear.  Fatherhood and sonship do have meaning for us on account of our finite human perspective.  But when we baptize “in the Name of the Father, and of the Son, and of the Holy Spirit,” we are baptizing into what, from our finite human perspective, God has revealed himself to us to be.  God really is, in himself, Father, Son, and Holy Spirit, but he is not, in himself, Creator, Redeemer, and Sanctifier.  Had God opted not to create at all, he would not have been Creator.  Had he opted to leave us in our sorrows, he would not have been Redeemer.  And if he did not enliven us with the quickening power of his own creative love, he would not have been Sanctifier.  These titles all refer to what God is to us, and so, they leave us always on the outside of the divine life, looking in—and that is something altogether different from what baptism is supposed to do.